NOT FOR DISSEMINATION IN THE UNITED STATES OR TO U.S. NEWSWIRE SERVICES

Stated Mr. Bharti, “Ireland has an incredible opportunity to share its abundant renewable energy with the world. Having visited both commercial sites and large port facilities, the entrepreneurial spirit is very much alive in the country. Ireland has the ability to become a true global leader in the production of renewable energy due to its geographical location, abundance of renewable energy (having some of the best commercial grade wind speeds on the planet) and favorable taxation.”

As Conn Murray, former CEO of Limerick City and County Council sates, “Ireland itself requires only 6 or 7 gigawatts of power to run the country. According to most reports, the country is capable of producing over 40 gigawatts of clean energy, mostly through wind power. This puts Ireland in position to become one of the largest exporters of green energy in Europe. The most obvious choice to export green energy is through green ammonia, and AmmPower appears able to help the country facilitate this.”

Ireland is investing heavily into offshore and onshore wind farms, and is currently upgrading their internal grid to be able to facilitate the transfer of energy from the point of production to point of use. Pictured below are Rene Bharti and Paul Sparkes, President and Advisory Board Member, respectively, of AmmPower, standing at Shannon Foynes Port in front of large offshore wind turbines. 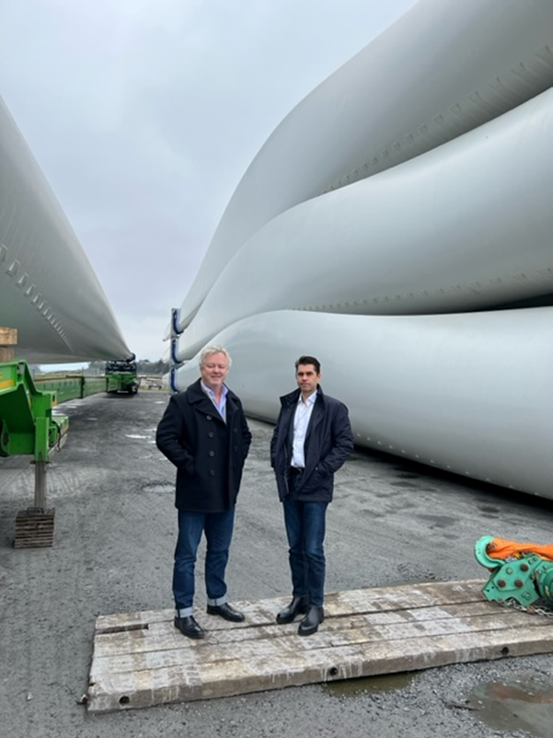 Paul Sparkes, states, “The size and scope of the on- and off-shore wind projects in Ireland is tremendous. Seeing the rapid deployment, and government strides to make Ireland the hub of renewable energy was extremely impressive. Having met with top officials in most of the key counties, AmmPower was able to forge relationships that we hope will lead to a large green ammonia footprint in the country.”

AmmPower Corp. is emerging as a world leader in the production and commercialization of green ammonia. Through its three core concepts of feed, fuel, and move, AmmPower has the capability to capture the fertilizer market, the shipping fuel market, as well as the movement of hydrogen as a carrier within the country of Ireland.

On Behalf of the Board of Directors

AmmPower is a clean energy company focused on the production of green ammonia. The Company is based in Toronto, Ontario, with a research and manufacturing facility in Southeast Michigan. The company is active in all facets of green ammonia production, including the production of green fertilizers, carbon free shipping fuel, and the ‘cracking’, or moving of green hydrogen as ammonia. The company is working on the development of proprietary technologies to produce green ammonia and green hydrogen at scale, including the investigation of unique catalytic reactions to bring down costs and to take advantage of carbon credits in the renewable energy space. AmmPower currently holds several LOIs with ports in Brazil, the United States, and is currently completing its IAMM™ prototype to create green ammonia for the agricultural industry. The company also holds a lithium exploration property in the James Bay/Eeyou Istche region of Quebec and an option on the Titan Property located in Klotz Lake area in Northwestern Ontario.

The Canadian Securities Exchange (CSE) has not reviewed, approved, or disapproved the contents of this press release.